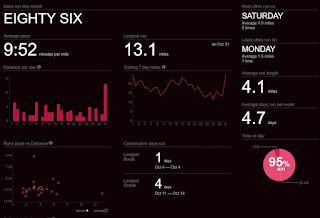 Overall, I'm not happy with the average statistics for this month. None of them make me proud. But, I ran consistently, I stayed healthy, and had no injuries. Oh yeah, I also won a 5K race! I am proud of that one singular run. Damn, it felt good to be in the lead, maintain the lead, and win the freaking race! Just a 5K, but that's cool with me. I've been working on speed, rather than endurance, so it's nice to feel that solidify. My finish time was only 20:55 (not my best, but good for a 55-year old). Can't believe that it won the whole race. Age group? Sure. Overall win? Surprising. But, you can only compete against those in front of you. I beat everyone that showed up. Will it happen again? Not likely! But I'll still compete for my age group. Here are my stats for October:

Not my best month. Except for the 5K race win! I don't have any planned races for the rest of this year. Plan on keeping some speed, but also working more on endurance. Had one of my worst 13 mile trail runs on the Kickapoo Rail Trail last weekend. It felt horrible to struggle on such a "short" long run. That will change in November and December. 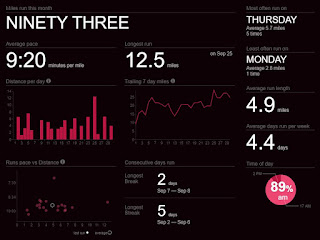 September was the second month in a row that I didn't even reach 100 miles. Unusual for me. Felt bad at first, but I was also injury free, healthy, and happy. Hard to beat that! And I ran one race...and it went well. Only an 8K, but I ran solid from start to finish (36:42). My main goal was to run evenly by power (watts) and not worry about pace or heart rate. It worked. Held myself back at the start, but forced me to push a little in the middle. I was 24th overall out of 554 runners and 3rd in my age group (50-59). Happy. So, maybe I am not gaining endurance, but my speed is coming back. I'll take that swap. For now. Here are statistics comparing August to September:

Same number of total runs, about same mileage. Biggest difference was longest run (33 vs 13 miles) and average speed (11:16 vs 9:20 minute/mile). I always consider myself an ultrarunner. Now I'm thinking I'm potentially a good short distance racer. Mile, 5k, 8k, 10k. Maybe half-marathon too--that counts as short, right? I'll eventually return to marathons and ultras. For now, I'll still focus on the shorter races. I have a 5k road race and 5.5 mile trail race at the end of October. More power to me. 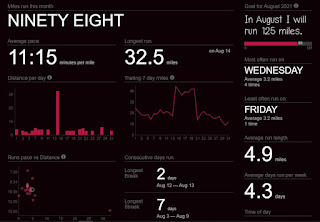 I had high hopes for August. More miles, good races, celebration of summer running. They did not pan out. I ended the month of August with my lowest monthly miles of the year. Plus, I ran my slowest 5K ever (23:30 at Mahomet 5K) and then ran an ultra in one of my worst performances at that race too (33 miles at Howl at the Moon 8-hour). So, I've lost speed and endurance. Yikes. I realize I'm getting older, and full-blown PRs may be in my past, but I still feel I have good age-group performances inside me. I just need to let them out! Here are my running numbers for August, with a comparison to July:

Pretty much every stat I track was worse in August than July. At least I did get a new long run "best for the year" at 32+ miles. Not much comfort in that achievement. I know the heat and humidity got to me, but July was warm and humid too. No excuses, just reality. Can't wait for the cooler fall weather. October will be my month! I'll try to get back to good running in September. Consistent distance plus speed will get me faster race times. I only have one race in September (Run to Remember 8K). I'm not ready for that one, but will be ready for two races in October: Heartland 5K and Allerton 5.7 miler. Also have a virtual half-marathon in October. Think I can get a reasonable time on the flat KRT course sometime in October.

My 18th Howl at the Moon Ultra Coming Up 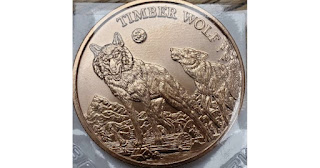 This Saturday, August 14, will be my 18th Howl at the Moon 8-Hour ultra. I've accumulated 654.77 race miles at this event. I'm proud of that statistic. Unfortunately, the race has not gone well for me in the last 4 attempts. The previous 4 races were all DNFs (dropped out before the full 8 hours). Sad. I hope this year goes better. Need the full 8 hours and reasonable mileage.

Last year (2020) the race was cancelled due to the COVID-19 pandemic. I think the time away from Howl and racing has made me hungry to compete. Mostly against myself, not other runners. I need to finish the full 8 hours this year! Weather looks to be pretty good (expected high of 80 degrees and not too humid). I'm not "well-trained," but I did get in 28+ miles at the Last Buffalo Standing run in mid-July. I'll draw on that performance to push me during Howl. No grand goals this year...simply stick it out for 8 hours. At least 31 miles. An even 10 loops (35 miles) would be good. Anything more would be icing on the cake. "Just don't stop" is my mantra. My best at Howl is 47 miles. That won't happen this time. For this year, 40 miles will be my "A-goal." A total of 35 miles is my back-up goal. And 31 miles (50K) is my minimum goal. Wish me well.

UPDATE: I only did 33 miles in 8 hours. Lots of walking! Not happy.

Chris Ⓥ
I am a vegetarian Ⓥ ultrarunner. Usually run trails rather than tracks or roads.